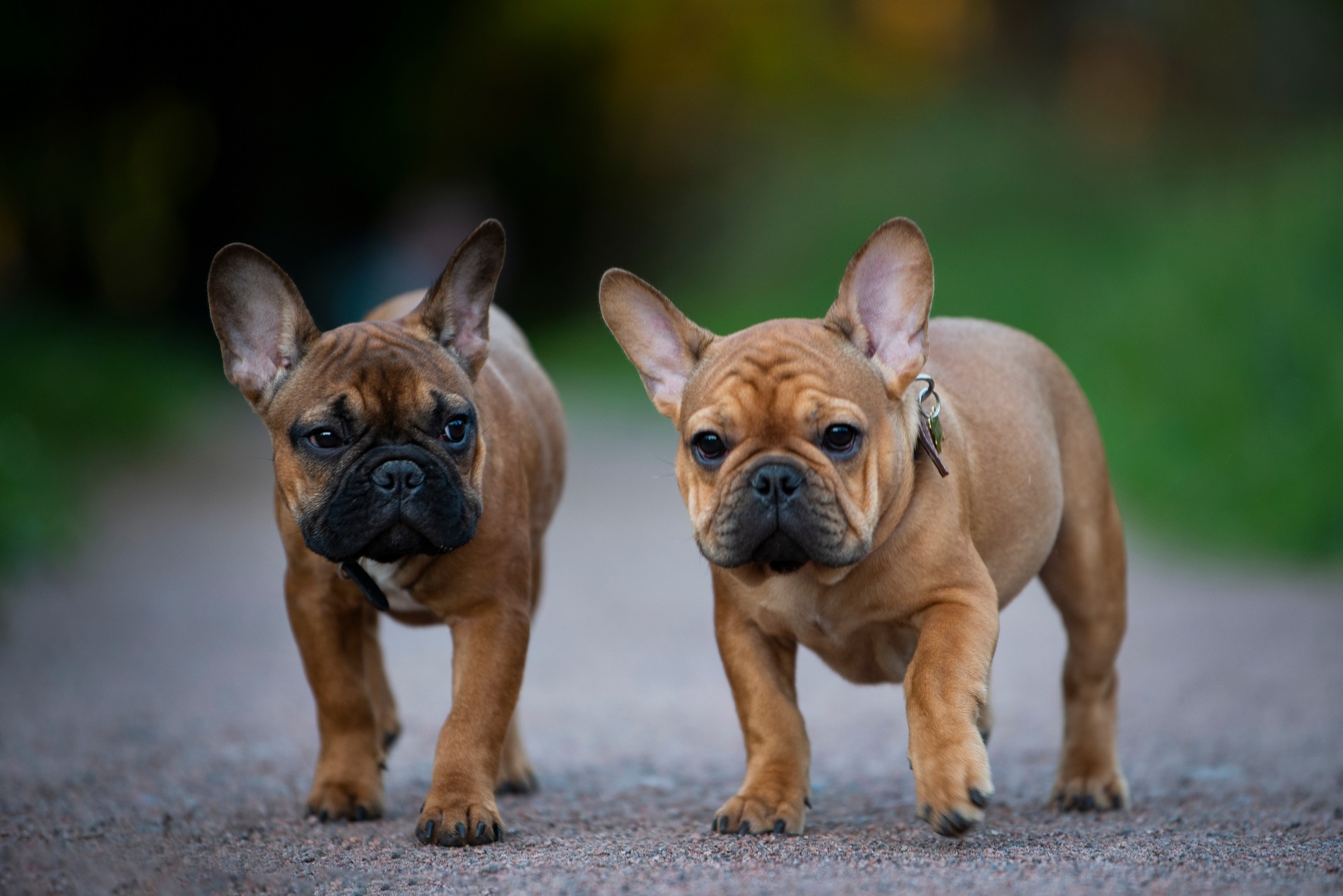 Posted at 20:27h in Breeds by Brooke Neuman

French Bulldogs are sweet, affectionate, and downright funny. These pups have a Parisian flair and a laid-back attitude that suits their quirky look and miniature size. Portable, agreeable, and a little mischievous, one look at a French Bulldog and you’ll notice a shining personality beneath their kind, dark eyes.

There’s no limit to a French Bulldog’s love. Whether they’re snuggling up with you on the couch, scampering over excitedly as soon as you walk in the door, or gleefully following you around the city, they’re your pal for life.

Good with other dogs 4/5

While your French Bulldog might prefer to be the center of attention, they don’t mind sharing the spotlight on occasion. These dogs can happily cohabitate with other animals.

French Bulldogs have a gentle and sweet disposition, making them ideal for homes with small children. Kindness, patience, and affection are key parts of the French Bulldog temperament.

While typically friendly and social, French Bulldogs have a deep sense of loyalty to their owners that can sometimes manifest as aggression. Fortunately, through proper training and care, this behavior can be easily corrected.

French Bulldogs were bred for domestic lives—perfect for busy metropolitans and small, urban apartments. While they’re just as happy out in the country, they’re an ideal choice for those living in smaller spaces.

For first-time dog owners, French Bulldogs are an easy pick. They’re highly trainable and undemanding when it comes to exercise and stimulation.

These pups pack a lot of emotion into their small frames. French Bulldogs are highly sensitive to their owner’s emotions, tones of voice, loud noises, and just about everything else.

French Bulldogs can tolerate a few hours away from their special person, but as you approach the seven-hour mark, their disposition may start to turn. Too much time by themselves can result in emotional turmoil and misbehavior from the French Bulldog.

A short coat and small body make the French Bulldog sensitive to the cold. To avoid hypothermia, keep your French Bulldog bundle up during winter walks.

French Bulldogs can have a hard time during the warm months, as well. Their short noses make them extra sensitive to hot weather, so ensure they have plenty of water and a place to cool down during summer scorchers.

If you are looking for the types of dogs that don’t shed, Frenchies aren’t the best choice. While some breeds only shed seasonally, French Bulldogs shed year-round. You’ll likely be vacuuming up hair on a regular basis.

These year-round shedders benefit from regular grooming. Brushing and bathing can help combat excessive shedding and keep your French Bulldog looking and feeling their best.

French Bulldogs are average droolers, so you can expect a little saliva around mealtime. If you notice your Frenchie drooling more than usual, contact a veterinarian, as this behavior could be related to a potential health problem.

Short, smooth, and shiny, French Bulldogs have a silky feel to their fur. Along with their wrinkly, loose skin, expect your Frenchie to be extra soft to the touch.

What are the potential health issues? The French Bulldog profile is a generally healthy one. Unfortunately, they may be more prone to respiratory issues than other breeds, due to their squished face. Additionally, some Frenchies suffer from unpleasant but manageable skin issues and allergies.

Notorious couch potatoes, it’s easy for French Bulldogs to miss out on healthy exercise while continuing to scarf down their meals with vigor. Canine obesity can be a serious issue, so keep an eye on your dog’s weight and encourage healthy habits.

The typical French Bulldog size is under 28 pounds and less than 13 inches tall. Though small, French Bulldogs have a noticeably muscular frame and a sturdy build.

French Bulldogs can be highly agreeable during training sessions, though they may occasionally exhibit a stubborn mood. To combat this, remain consistent and don’t let their misbehavior derail their training.

The intelligence of French Bulldogs shines through in their interactions with humans as well as their love of games. Additionally, their adaptability to new scenarios and environments is closely related to their intellect.

Because Frenchies were bred as city dogs, they’ve never had much of a need for their hunting instincts. It’s uncommon to see a French Bulldog chase after anything besides a treat or a toy.

Frenchies don’t particularly like to bark, but they are known to make a number of quieter vocalizations. Yips, yawns, growls, and gargles are all ways for your dog to express their feelings.

Most Frenchies prefer the comforts of home to the open road. It’s highly unlikely your pooch will take off and even less likely that they’ll make it very far.

These dogs may spend most of the day sleeping, but after their beauty rest, expect an excited and energetic pup—at least until it’s time for their next nap.

French Bulldogs may look tough, but they shouldn’t overexert themselves, again because of their flattened face structure. Low-intensity activity is preferable for this dog breed.

Most French Bulldogs need only moderate exercise to maintain good health and stable energy levels. A quick jog around the block or even a run around the living room or backyard could be enough to satisfy their exercise needs.

Despite their typically laid-back demeanor, you still might find your Frenchie in the mood to play. Tug of war and fetch are staples of doggy playtime for this dog breed.

Food puzzles and brain games are great ways to give your French Bulldog the occasion mental boost. Your pooch won’t be too demanding, but offering a variety of activities is the best way to keep them entertained.

The mellow mutts known as Frenchies have skyrocketed to puppy-stardom, finding a spot at the top of many rosters of most-loved and sought-after dogs. What makes the French Bulldog such a one-of-a-kind canine? Behind their tiny frames is the spirit of a charismatic charmer, ready to follow you wherever you go. Liveliness, sociability, and an affectionate nature are just a few of the most beloved French Bulldog characteristics.

The French Bulldog’s appearance is unmistakable due to their flattened noses, wrinkled skin, and oversized ears. That said, there are a variety of French bulldog colors and patterns, and no two French Bulldogs ever look quite the same. This breed is also notable for its penchant for sounds. Snorting, snoring, wheezing, and even the occasional flatulence are all par for the course.

Frenchies are active animals, at least when they’re not zonked out on the couch. These pups frequently bounce between eager companions and full-time cuddlers, always hoping for just a few more precious minutes to cozy up with their favorite human. The most important of the French Bulldog facts? These dogs love to be with their owners—24/7. For those seeking a furry friend to join them on their urban adventures, you’ll find a lot to love in a French Bulldog.

Despite their name, French Bulldog history begins back in England. In the mid-19th century, industrious Brits in the lacemaking industry began breeding the toy bulldog, and after the Industrial Revolution upended this particular sector, the former Nottingham lacemakers moved to Normandy where they continued to breed French bulldogs.

Once in France, popularity for their dogs steadily grew. These lap-sized toy Bulldogs were treasured by artists, politicians, and commoners alike. Fully embraced by French culture, the breed became firmly established.

By 1885, an American breeding program for French Bulldogs was established, and these pups became icons of high society. Over the last century, they’ve been frequent contenders in international competitions, and in the past decade, more Americans than ever have welcomed Frenchies into their homes. All in all, it’s a very good time for the French Bulldogs.

What You Need to Know as a French Bulldog Owner

Bringing a new dog into your life is about a lot more than providing the bare essentials. Familiarize yourself with the most crucial French Bulldog breed info to better prepare your home for a new furry friend.

Vet visits, vaccinations, and standard check-ups are important for all dogs. In particular, French Bulldogs are prone to mouth, snout, and respiratory problems because of their flattened faces. Genetic predisposition may also leave your Frenchie more vulnerable to skin infections and eye conditions.

You can expect an even-tempered and agreeable pet when it comes to getting a French Bulldog puppy. That said, Frenchies are bred as a companion dog and are prone to separation anxiety when away from their owners for too long. Stick by your French bulldog puppy’s side or take them to doggy daycare to avoid any emotional turmoil.

They are the quintessential apartment dogs, bred for Parisian streets and urban environments. Additionally, you could also provide a wonderful life for a French Bulldog in the suburbs or a more spacious rural area. Ultimately, a comfortable, mild temperature and a cozy place to rest are key to this breed’s happiness.

Daily exercise should be a part of all dogs’ routines, though owners need to be careful not to over-exhaust their tiny companion. French Bulldogs run the risk of overheating and may even struggle to catch their breath, but should still engage in moderate, regular exercise for their overall health.

For success in French Bulldog training, prioritize plenty of positive reinforcement to mitigate their headstrong attitude and keep them in line. Just avoid raising your voice at your Frenchie puppy, they are extra sensitive to scolding.

them through the day. Avoid high-fat foods and table scraps to lower their potential for canine obesity (no matter how much they beg and whine, giving you the ultimate puppy dog eyes).

Looking to learn more about your French Bulldog’s health? The AskVet App is your instant connection to a licensed veterinarian.